Senate Republicans push for clarity in mask enforcement by ISBE 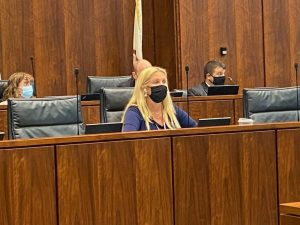 After questioning representatives of the Illinois State Board of Education (ISBE) about the authority they have to revoke a school’s recognition status and withhold state funding for non-compliance with mask mandates, on Tuesday members of the legislature’s Joint Committee on Administrative Rules (JCAR) encouraged ISBE to place all policy and guidance in administrative rule and recommended ISBE provide an update to the Committee within 30 days.

The JCAR motion, which included acknowledgement that policy outside of the existing rulemaking process may exist, received unanimous support by the bipartisan and bicameral panel.

“It comes as no surprise that ISBE’s decision to revoke school recognition status and withhold state funding from schools that do not follow the mask mandate has been met with legal challenges,” said State Senator John Curran (R-Downers Grove). “There is no clear understanding of the steps, timeframes, and due process that is involved between when a school is notified of non-compliance with the mandate and when recognition status is revoked. The lack of process is leading to unjust outcomes and rightful outrage amongst parents.”

As ISBE representatives were questioned, Kristen Kennedy, Deputy Legal Officer for ISBE, said the agency did not plan to participate in the rulemaking process through JCAR, and would instead use authority she believes ISBE has through a court decision that found that executive orders for mask mandates at school were lawfully issued and are enforceable.

“Through our questioning and Ms. Kennedy’s testimony, it became clear to me that ISBE had promulgated policy outside of rule,” said State Senator Donald DeWitte (R-St. Charles). “ISBE had an obligation to take guidance handed down by the Governor and the Department of Health, and use JCAR’s rulemaking process to create clear steps for enforcement. There is a big difference between guidance and rules or policy, and ISBE can’t just arbitrarily determine how it will enforce mandates.”

Senator Sue Rezin (R-Morris), also questioned ISBE about the perceived overreach, and pointed out that the 30-day extension places the next JCAR meeting in the same time frame as the legislature’s fall veto session. “The required supermajority of JCAR was unwilling to publicly chastise ISBE for the arbitrary implementation of enforcement tools, so we set a 30-day clock for them to bring us rules,” said Sen. Rezin. “I don’t believe it’s a coincidence that the 30-day extension brings us to when the legislature will reconvene. We will have to see if ISBE brings us rules, or if they will ask the legislature to take up the issue legislatively.”

The official motion made by JCAR reads: “There is a concern that policy outside of rule may exist and JCAR encourages ISBE to place all policy and guidance in administrative rule. JCAR recommends ISBE provide an update to the committee on this point within 30 days.  Additionally, JCAR recommends that ISBE propose additional amendments to 23 Ill. Adm. Code 425 expanding and clarifying the school recognition process to include a better-defined process prior to revoking a school’s recognition.”